Quantum computers: state of development and areas of application

Quantum computers have specific properties that enable them to process exponentially more information than today's computers. But how do quantum computers actually work? At what stage of development are they and where are potential applications? These are the basic questions we will answer below.

How do quantum computers work?

One bit, the smallest electronic memory unit, forms the basis of today's computers. By means of voltage it can assume the states 0 or 1. In quantum computers, the quantum bits (qubits) form the equivalent of the bits:

The rapid further development of quantum technology is currently still being hampered by problems that have not yet been sufficiently solved. These include in particular:


The processes in a quantum computer are very sensitive to external influences. Qubits, for example, are influenced by even the smallest temperature changes or low radiation. The processes must therefore be perfectly isolated from possible interferences.


As long as the qubit is in the state of superposition, an arithmetic operation can be performed. The decoherence, i.e. the transition from the superposition to the state 0 or 1, must therefore be delayed as long as possible. A problem in this respect is that it is very time-consuming to keep the qubit in the superposition state. Currently, this only lasts about 100 milliseconds.

3. Errors increase with number of Qubits


Another problem is the high error rate of quantum computers due to the fragile superposition. The errors increase exponentially with the number of qubits. The more qubits there are, the more fragile their interaction becomes and the more inaccurate the result becomes. To increase the computing power, however, a higher number of qubits is required.

The challenge is therefore to further increase computing power while maintaining or improving the highest possible accuracy. In order to achieve this, research is working on an error correction that ensures that errors can be corrected even with a high number of qubits and that the result is as accurate as possible. The drivers of quantum technology are currently IBM, Google and Microsoft.

At the Consumer Electronics Show 2019 (CES) in Las Vegas, IBM presented its first commercial quantum computer for use outside the laboratory. The system combines quantum and classical computer parts, has 20 Qubit and can be used for research and business applications.

However, the 20-Qubit machine is not yet powerful enough for most commercial applications. IBM has therefore also stressed that this is a first attempt and that the systems are "designed to one day address problems that are currently considered too complex and exponential to be addressed by traditional systems".

With the IBM Q Network, the company is currently establishing a worldwide network of industrial, research and scientific institutions. The aim is to bring business and research interests together to investigate applications for quantum computing. The organizations working with IBM will gain access to their quantum software and cloud-based quantum computing systems.

Founding members of the network include Daimler, Barclays, Hitachi Metals, Honda, JP Morgan Chase, Samsung and the universities of Oxford, Keio (Tokyo) and Melbourne. Partnerships have also been established with ExxonMobil and research laboratories such as CERN and Fermilab.

In March 2018, Google introduced its Bristlecone chip. With its 72 quantum bits, this quantum computer chip surpasses anything that has ever been seen before. With the support of NASA, proof is to be provided in 2019 that quantum computers can solve problems that conventional computers simply cannot solve. 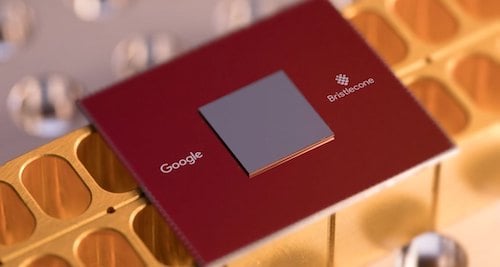 IBM and Google use superconducting circuits to build quantum computers. In contrast, Microsoft is working on a quantum computer with topological qubits. According to Microsoft, the advantage of these qubits is that considerably fewer error correction mechanisms are required.

Microsoft would therefore need considerably fewer Qubits for the same task, which would reduce the effort. In comparison, the competition has to deal with error corrections for much larger qubits. The software giant could gain a significant advantage on the market with this much more powerful quantum computer - if it works.

The first quantum computer of this kind is scheduled for completion in 2023. With the Microsoft Quantum Network, Microsoft has also made quantum tools available to its network partners since 2019.

Quantum computers could potentially be used to search for more efficient routes, to predict the stock market, in material and drug development, in production and manufacturing, in cryptography and much more. Here are a few examples:

One of the most promising applications is the quantum simulation of materials. The aim is to calculate material properties in advance. This is not possible with conventional methods, since even supercomputers cannot calculate magnetism and electricity down to the last detail and thus cannot provide really reliable predictions about material properties.

Due to the error rate, however, more complex simulations require a large number of quantum bits, which are currently not available in quantum computers. However, a promising development at the Institute of Quantum Optics and Quantum Information of the Austrian Academy of Sciences (ÖAW) will in future make it possible to perform powerful quantum simulations of problems in chemistry, materials research or high-energy physics that have so far been virtually impossible to solve.

Today's encryption methods only work because it would be incredibly CPU-intensive to crack them. Even supercomputers will take years to crack. Quantum computers could therefore become a danger to less secure encryption in the future.

However, even a quantum computer with several million qubits would take at least 100 days to crack 2048-bit encryption, as used by banks in online banking, for example (source: BSI study). However, quantum computers could also support the development of new encryption methods that are absolutely secure.

Future mobility will require the management of highly complex processes that could push current computer generations to their limits or overtax them. If one thinks of traffic jams, for example, today's systems only report traffic jams. Numerous drivers then change routes and often end up in traffic jams again.

In an initial research project, Volkswagen has now shown that quantum computers can be used efficiently for traffic control. The real-time data from 10,000 taxis in Beijing were transferred to a quantum chip and analyzed. 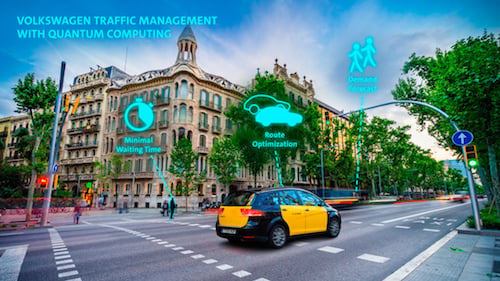 Based on this, the research team developed an algorithm that steered taxi drivers along different routes before the traffic jam occurred. The researchers were able to predict traffic jams 15 minutes in advance and optimize taxi routes accordingly. In this way, the driving time could be significantly reduced.

Special algorithms can therefore be executed exponentially faster with Quantum Computing. This results in a huge potential to use quantum technology in many industries. For example, quantum computers could also be useful for optimizing production planning and production.

Quantum computers are still in the early stages of development, but the potential for applications in areas such as medicine, logistics, production, materials research or mobility is enormous. Experts assume that in five to ten years quantum computers will replace today's computers in many tasks. Companies should therefore look at the potential and possible applications as long as the technology is still in its infancy.

Born in Vienna. Since 2018 "Certified Service Design Thinker" he has been pursuing his passion as Innovation Manager at LEAD Innovation.