With its "StreetScooter", Deutsche Post is mixing up the market for electric mobility solutions in the logistics sector in Germany. As the carmakers were unable to supply a suitable model, the group developed its own electric transporter.

Streetscooter was born out of necessity

Originally, as part of its "GoGreen program", the logistics group was looking to car manufacturers for a small van that would reduce pollution in city centers. But the manufacturers did not have a corresponding offer. Thus the logistics group itself became a car manufacturer and in 2014 took over the Aachen start-up Streetscooter in order to jointly develop an electric delivery vehicle suitable for everyday use. The drive comes from the automotive supplier Bosch.

Within a very short time, the StreetScooter developed into the market leader for electric commercial vehicles in Germany. Since the Deutsche Post also sells the electric transporter to third parties, the demand is increasing. In order to meet this demand, the Group opened a second production plant in Düren in May 2018. Previously, only the yellow E-Speedcars were produced in Aachen.

The production capacities of both plants are now up to 20,000 electric vehicles per year. Swiss Post itself plans to put around 5,000 electric transporters into operation each year - until the German fleet is completely converted. With the approval for large-scale production in December 2018, large quantities of vehicles can now also be approved for fleet orders without any problems, even abroad.

The successful concept is based on adapting the vehicle to customer needs - and at an affordable price. The StreetScooter can be flexibly configured with a box, flatbed, three-sided tipper, refrigerated box or integrated drawers.

„We were and are convinced that the electric motor is the superior drive for the last mile. We consistently orient ourselves to the customer's intended use and requirements. The key question is: Which concrete solution helps our customers to make their work processes simpler and more efficient? The StreetScooter is a tool that makes customers' operational processes more efficient.“ – Professor Dr. Achim Kampker, CEO of StreetScooter GmbH

The StreetScooter is currently available in three sizes and different variants: As the compact all-rounder WORK with an external length of 4.70 metres, as WORK L with a useful 8 cubic metres loading volume and as WORK XL with a loading volume of 20 cubic metres and a range of 200 kilometres. Prices start at 31,950 euros for the basic WORK model.

Swiss Post estimates the annual CO2 savings at 26,000 tons - with a 100 percent share of green electricity. The cost savings for maintenance and wear are 60 to 80 percent compared to conventional vehicles. 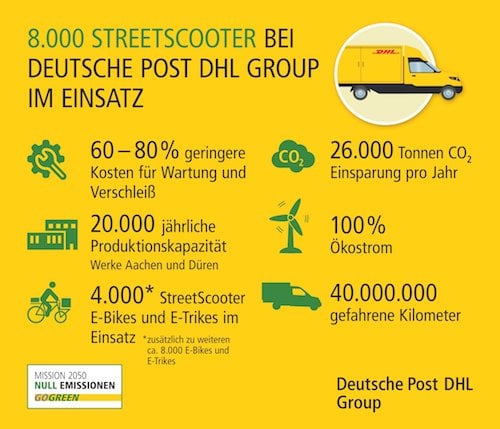 Deutsche Post is now successfully selling the StreetScooter to other companies - from craftsmen, suppliers and commercial enterprises to public enterprises. The Group is benefiting from the diesel crisis, which is increasingly boosting demand for the electric transporter.

More and more tradesmen, bakers and municipal companies are relying on the electric van from Swiss Post for fear of diesel driving bans. Thousands of StreetScooters are now rolling through German city centers. With 3,863 new registrations, the Stromer 2017 was the best-selling electric truck in Germany. 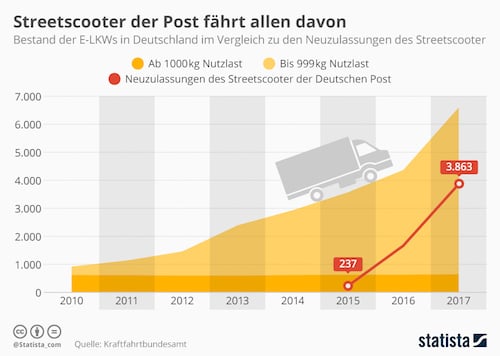 Since 2017, for example, StreetScooters with a cooling superstructure for the fish supplier Deutsche See have been flying emission-free and whisper-quiet to customers. Roland Schüren, master baker from Hilden, supplies his 17 branches in an environmentally friendly way and the electric company J. Organista also comes to the customer with the electric car from Swiss Post. In Bonn, nine WORK electric transporters are used at the Greenfield Office, the larger WORK L model drives for the civil engineering office.

In other European countries, the StreetScooter is used by DHL in the Netherlands and Austria. In addition, the electric transporter drives for the English milk supplier Milk & More, which acquired 200 vehicles and replaced one third of its diesel fleet. According to the company, this has already saved 90 percent of operational fuel costs.

„We wanted to make this unique tradition once again relevant to today's customer needs. For this we need a local product portfolio, new IT systems and reliable, quiet and environmentally friendly vehicles. With the StreetScooter we have found the perfect vehicle for our needs.“ – Patrick Müller, CEO Milk & More 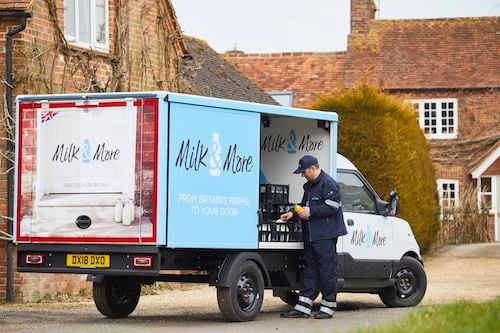 Last year, the innogy subsidiary Westnetz entered into a development partnership with StreetScooter with the aim of adapting e-vehicles specifically to its own requirements. This makes Westnetz a pioneer in electric mobility among German network operators.

300 StreetScooters will be modified and manufactured within the scope of the cooperation according to the special requirements of the network operator. Adjustments will be made to the engine power and maximum speed. In addition, the use of fuel cells and hydrogen is planned in order to increase the range and adapt the vehicles to the requirements of network operation in rural areas. The StreetScooters will be used as operating vehicles for the network technicians of Westnetz.

The energy service provider EWR is also already using the StreetScooter in its own fleet. The company has also made it its mission to promote the expansion of e-mobility in Rhineland-Palatinate and, in cooperation with StreetScooter, to broker up to 500 e-vehicles to companies and end customers - including a wallbox and the appropriate power contract.

„We are in constant contact with tradesmen and municipalities. That is why we know: There is a concrete need for e-commercial vehicles. We see it as our responsibility to make active progress in this area and to focus on the issue of e-mobility in the region.“ – Stephan Wilhelm, Member of the Executive Board of EWR AG.

Bosch is setting up the pilot project in a similar way to Ikea and Hertz: The parking spaces in the DIY stores have charging points where the electric delivery vans are available for spontaneous rental. They also have to be parked there after transport. The customer pays an hourly flat rate that includes the kilometers driven and the electricity costs. If the pilot project is successful, Bosch plans to expand its car-sharing service with additional partners.

The start-up UZE Mobility has developed a more comprehensive business model. The company recently acquired 500 StreetScooters and is going innovative ways with car sharing, advertising and Big Data: In the future, the electric transporters will be available to private users in selected metropolises by app, e.g. for removals, bulk purchases or bulky purchases - free of charge. UZE Mobility wants to finance its vehicles with advertising on the vehicles. According to UZE Mobility, the rental prices for the vehicles would be close to zero as a result of the income generated. 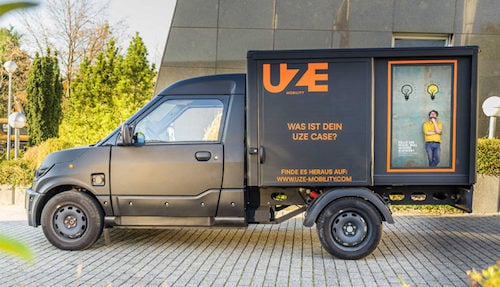 The company earns money by selling vehicle and traffic data, which are recorded in daily operation by the electric transporters. GPS transmitters and the specially developed UZE Box are used to collect and evaluate the data.  On the one hand, the information is interesting for advertisers who can use an innovative and targeted form of advertising. On the other hand, local authorities have already expressed their interest in reducing the costs of operating and maintaining the infrastructure (e.g. What is the condition of the roads like? Where are the new potholes? Where is the traffic regularly slowing down?).

„Data will be the gasoline of free electric mobility. Thanks to the large amount of vehicle data, companies will be able, for example, to place interest and street-specific advertisements on advertising displays on electric vehicles. People are targeted on the road with regional offers. Outdoor advertising becomes more measurable and calculable for companies. In addition, we are currently developing further data-based business models in order to reach the emission-free city in 2025.“ – Sebastian Thelen, Digital chief of UZE Mobility.

Despite all the prophecies of doom, Deutsche Post has managed to develop an e-transporter that brings real added value not only to its own company, but also to customers from other industries. Further projects and business ideas are already being developed. The company is currently working on a version with a fuel cell and in 2018 launched an autonomous test fleet with technology from Nvidia and ZF. In addition, the environmentally friendly delivery of food in rural regions is currently being tested under the motto "My Country Post". It will therefore be interesting to see which business models Deutsche Post will be developing in the future. Read more about eMobility in our article The future of electromobility.

Born in Lower Austria. At LEAD Innovation she works as Head of Innovation and focuses on agile innovation management via SCRUM.