The death of the power cable: How a US wireless power company is revolutionizing energy supply

Tech company Viziv Technologies and Baylor University last year announced a new research partnership aimed at commercializing an entirely new method of providing long distance wireless electrical power. This article will tell you what this is all about.

The US company Viziv Technologies (formerly Texzon) built a strange-looking tower at Interstate 35 near Milford Texas at the end of 2018, reminiscent of Nikola Tesla's Wardenclyffe Tower. The Tesla Tower was built at the beginning of the 20th century and was supposed to supply energy wirelessly all over the world. However, the project was never completed. After Tesla could not pay the mortgage for the property, the tower was scrapped by creditors in 1917. 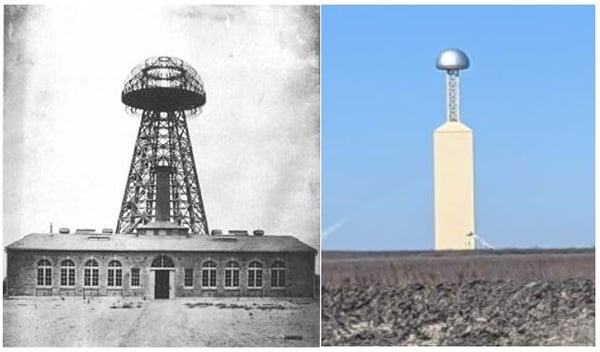 Michael Taylor, Vice President of Communications at Viziv Technologies, commented on the similarity of the Viziv Tower with the Wardenclyffe Tower as follows:

„As with all scientific progress, our work would not be possible without the pioneering work of the scientists and engineers ahead of us. It's flattering to be compared to a visionary like Tesla, but Viziv's engineering team has the advantage of modern computer modeling, more precise instrumentation and one hundred years of scientific development. We are simply blessed to have the right tools at the right time for this particular breakthrough.“

Energy transmission on the basis of the Zenneck wave

The wireless power supply system uses a "transmitter probe" located near the power generator to trigger a Zenneck carrier wave. Receiver antennas are suitably positioned around the world to receive the signal and load the power into a local micro-network or conventional network architecture. Read more in a presentation by Rick Deveraux at the "Geography 2050: Powering Our Future Planet" event at Columbia University in November 2018:

According to Viziv Technologies, the innovative system will improve the quality of life of people everywhere by enabling the delivery of affordable electricity to the entire world:

„Our technology will provide real global access to electricity, especially for the 1.7 billion people who do not yet have electricity. Clean, safe, reliable and affordable wireless power systems will make possible important needs such as hot meals, advanced medical treatment and clean drinking water for people in developing countries. Electricity is the basis for achieving prosperity in developing countries. Introducing it into areas without electricity would help boost economies around the world.“

The Viziv system connects energy resources with those that need them - with a fraction of the environmental impact of current technologies. In the renewable energy sector, for example, prime power generation sites are often not in close proximity to the consumer and the construction of conventional transmission infrastructure is not economically viable. With the use of Viziv surface wave systems, solar parks in the world's uninhabited deserts will be possible to supply electricity to the world's most populous cities.

Unlike grid-connected power distribution systems, which are vulnerable to physical attacks and cascading outages during peak usage, wireless power is protected against these threats. A Zenneck surface wave is insensitive to weather conditions and is not affected by lightning strikes, geomagnetic disturbances, solar flares, or electromagnetic pulses such as those generated by nuclear detonation. Therefore, only transmitting and receiving units need to be protected. Nor would a wireless network age and eliminate the problems associated with the advanced age of today's infrastructure.

3. Rapid assistance in the event of a disaster

The technology enables the immediate delivery of electricity to disaster areas, changing the scale and efficiency of relief operations. If necessary, it can quickly provide alternative energy sources and avoid dependence on wired transmission infrastructure.

In addition, the field intensities generated are expected to be less than one percent of the current ANSI safety standards in the RF range. In addition to the economic benefits, the innovative system can therefore also be an advance from a health perspective, as it is based on low-frequency surface waves in contrast to 5G technology, which operates in the harmful microwave range.

Currently, around 17 percent of the world's population have no access to electricity, and for many people availability is sporadic and unreliable. The innovative technology of wireless energy supply has the potential to raise the standard of living of people around the world and herald a real energy revolution.

„For over a century, researchers and entrepreneurs have searched for solutions to transport energy safely and wirelessly over long distances. The search is over.“

Born in Essen, Germany and raised in Münster, Germany. At LEAD Innovation she works as an Innovation Manager and is therefore responsible for the successful handling of projects.

Necessity is the mot...

Crises have characterized the ...

Creating space for i...

The trend toward New Work has ...