Faster, better, cheaper: What innovation must be able to do

In the past, great innovations often came about by chance. Antibiotics, e-mails or credit cards - they were all unplanned by-products of research or development. Today, companies hardly have any scope for random innovations. They are under much greater pressure to innovate. We will show you some outstanding best practice examples that show what innovation must do today to be faster, better and cheaper.

Process innovation in the sense of optimizing business, production and logistics processes serves to increase productivity or reduce costs. The introduction of the assembly line in the automotive industry by Henry Ford at the beginning of the 20th century is probably the best-known example of process innovation. According to the latest study Advanced Robotics in the Factory of the Future by the Boston Consulting Group, robotics will bring about the next leap in productivity in the industry. 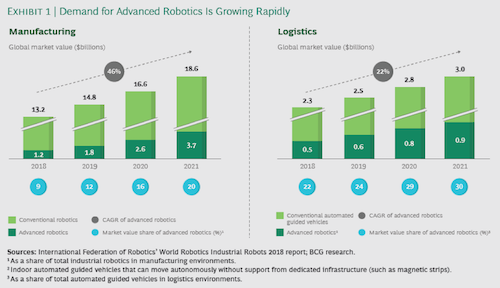 Source: Advanced Robotics in the Factory of the Future, Boston Consulting Group

Amazon is a pioneer with its warehouse robots. The globally active online retailer is investing massively in logistics robots and is increasingly automating itself. The robots accelerate processes and ensure that less space is required in the warehouse.

"We are at a stage like mass production when the assembly line arrived," says Roy Perticucci, Amazon's head of logistics for Europe.

As early as 2017, 80,000 robots were on their way in the Amazon halls completely autonomously and with a load capacity of up to 300 kilograms. With the Geoguidance software, logistics vehicles such as forklifts and other vehicles drive autonomously. They orient themselves on the ground with the help of QR codes. Therefore, electronics installed in the floor or special lanes are not necessary. The software orders the vehicles for deliveries and pick-ups, lets them "communicate" with gates, assembly lines and production machines and offers the possibility of transmitting information to warehouse management systems. Only bulky goods are still transported by the employees.

2. Better: Innovation with a high degree of innovation

Many companies tend to concentrate on "faster" and "cheaper" while losing sight of "better". Often only small changes are made to existing products, processes or business models. These incremental innovations have a low degree of innovation and contain neither new knowledge nor new technology. Radical innovations, on the other hand, are new products, services or processes with innovative characteristics and a high degree of innovation.

For example, 3D printers are already widely used. However, their use in industry is usually limited to the production of prototypes and simple models. The company In-Vision Digital Imaging Optics from Guntramsdorf in Lower Austria has now developed an innovative 3D process that can be used successfully in series production.

The Light Engine is an optoelectronic machine that uses up to eight million individually controllable micro mirrors to send high-resolution UV light signals to exactly those areas of the plastic to be processed where it is to cure. The 3D-printed products are much more stable, since in contrast to layer-by-layer application there are no predetermined breaking points. The Light Engine is used for the serial production of car components, dental implants or parts for kitchen machines.

The BioMind AI system, which was developed by the Artificial Intelligence Research Centre for Neurological Disorders at the Tiantan Hospital in Beijing, is also highly innovative. The system, based on artificial intelligence, defeated a team of China's top 15 physicians in diagnosing brain tumors and predicting hematoma extent.

When brain tumors were diagnosed, BioMind had a hit rate of 87 percent, while only 66 percent of physicians were correct in their diagnosis. In addition, BioMind needed only 15 minutes to diagnose 225 cases, while doctors needed 30 minutes.

In the BNY Mellon study "Future 24: 2021 - Faster, smaller, cheaper", the majority of financial analysts surveyed believe that the formula "more technological innovations = higher efficiency" will lead to a reduction in product and operating costs. Productivity is expected to accelerate over the next two years through increased innovation and technology. The topics artificial intelligence (AI), big data, 5G and automation are expected to dominate.

One example of a technology that will expand the application area of robot arms in the long term is the ArtiMinds software. The company, which has received numerous innovation awards, has developed special software that simplifies the programming of industrial robots and saves costs: Human movements are recorded electronically and transmitted directly to the robot arms. In this way, the machines learn motion sequences without time-consuming programming and can be used more flexibly with intuitive operation.

Centrifuge made of paper and thread

However, low-cost production does not always have to go hand in hand with highly complex technologies. Manu Prakash, assistant professor at Stanford University, developed a centrifuge from the simplest of means that achieves better results at 125,000 revolutions per minute than expensive professional equipment. The 20 cent centrifuge generates acceleration values of 30,000 g (30,000 times the Earth's gravitational pull), requires no electricity and can therefore also be used in poor and remote regions of the world. 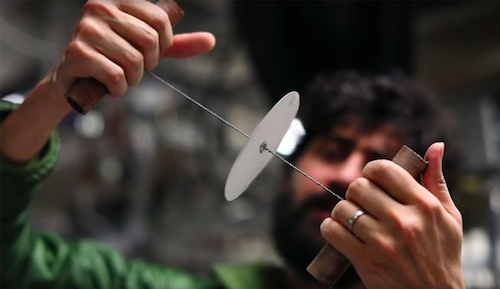 Manu Prakash was inspired by a children's toy known in German as Knopf-Jo-Jo. (Picture: Manu Prakash/Stanford)

With the paper centrifuge, blood samples can be processed and blood plasma separated from solid components in less than 2 minutes. Pathogens such as malaria, African sleeping sickness, HIV and tuberculosis can also be separated for further testing.

Some years ago Prakash had already developed a paper microscope, which costs less than 5 dollars and can also be used in developing countries due to its simple construction.

Faster, better, cheaper: What innovation must be able to do

Faster, better, cheaper: The pressure to bring innovations to market poses problems for many companies. Studies show that small and medium-sized enterprises in particular have not installed systematic innovation management in their companies. However, in view of the rapid pace of technological development, the intensive examination of the topic of innovation is of great relevance for every company in order to survive on the market in the long term.

Born in Essen, Germany and raised in Münster, Germany. At LEAD Innovation she works as an Innovation Manager and is therefore responsible for the successful handling of projects.