Get in touch with us
Trends & Future, Industry

Innovative yarns: 5 trends you should know

Textiles are only as good as the yarn they are knitted from. Innovative yarns thus form the basis for the fabrics of the future. And please don't just think of clothing. So that you don't lose the thread, this blog article informs you about the five most important trends in yarns - including surprising examples. 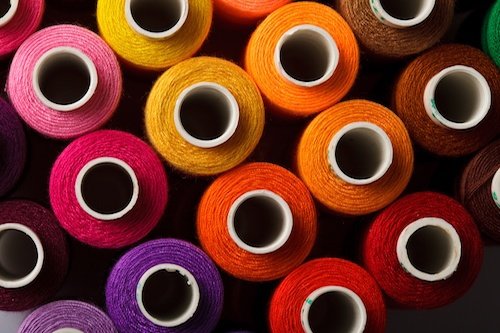 Bionic yarns: spiders as a model


Bionics is the science that tries to transfer phenomena from nature into the world of technology and thus make them reproducible. A simple example is the Velcro fastener. The technicians - guess - have copied that from the burrs. Nature also has a lot to offer in terms of yarns that technology can copy and the economy could benefit from.

Cobwebs, for example. The fibres from which they are spun are the most resilient currently available on earth. The thread is more elastic than rubber, many times stronger than steel and thinner than a hair. Cobwebs also inhibit inflammation, are antibacterial and do not cause allergies. They are biodegradable anyway.

With these properties, such a yarn is extremely interesting for several areas. The problem is - how can such a yarn be produced industrially? Because producing the product on spider farms has proved to be uneconomical.

The Munich company Amsilk has found a solution. She calls her product "Biosteel". To date, industrially produced cobwebs have brought them to market maturity in cosmetics. The microparticles used there are easier to produce than more complex threads. Spider silk provides optimal moisture regulation and a silky, soft skin. Amsilk is already working on other applications: For example, covers for implants made of artificial spider silk. The company Bold Threads, on the other hand, wants to offer clothing made of artificially produced spider silk already this year.


Cotton is a natural fibre. However, their use requires many resources and is therefore anything but sustainable. There are some alternatives from nature. Lenzing AG has developed one of them. The fibre is made of wood and can be produced in a particularly environmentally friendly way.

According to Lenzing AG, Tencel® - the registered brand name of the material - is more absorbent than cotton, gentler than silk and cooler than linen. Yarns from this fibre are used for the production of mattresses, bed linen, home text lilies but also wet wipes, baby diapers and sportswear. The Austrian sportswear manufacturer Löffler uses Tencel®, for example, to produce sustainably produced functional sportswear.

Recycled material: The raw material floating on the sea


What we throw away, sometimes carelessly, is often a valuable raw material for new things. New yarns can be obtained directly from old clothes. This possibility has been in use for several years now and the fashion giant H&M has also jumped on the bandwagon.

Adidas now wants to use another type of mountain of waste as a supplier of raw materials: The plastic garbage that floats on our oceans and is becoming more and more of a problem. Together with the non-profit organization Parley for the Oceans, the sports goods manufacturer developed sports shoes whose upper material is made 100 percent from plastic residues from the sea. The raw materials for this are yarns and fibres obtained from recycled and processed waste and (illegal) offshore networks.


The sportswear counts the steps of runners, bed linen informs about the condition of a patient in need of care and undershirts provide doctors with a long-term ECG of the wearer. Thanks to intelligent yarns, we won't have to wait too long for such textiles. Some of these products already exist. Last year the Japanese telephone provider NTT DoCoMo and the Japanese chemical company Toray Industries presented an intelligent T-shirt called Hitoe that measures the heart rate of its wearer.

A company based between the Bavarian Allgäu and Lake Constance has been offering a possible basis for further developments of wearables for some time. With Novonic®, Zimmermann AG has developed a conductive, elastic yarn that can be integrated into textile fabrics or individual threads. The yarn can transmit data and is also capable of conducting heat and shielding radiation.

The clever fabric is used, for example, in the Handycapp mobile phone case. This blocks the radio waves of mobile phones with the help of Novonic® fabric. However, only on the body side of the wearer, so that the mobile radio reception remains guaranteed. There are thousands of other applications for Novonic®. So far, however, the interest of the industry is still low. This may soon change in the dawning age of wearables.

Use of new materials: clever bacteria in the material


Researchers are always looking for new materials for the production of innovative yarns - or rediscover old ones. Developers at the Media Lab at MIT are using a very unusual material to produce functional tissue. Using Bio 3D printers, the researchers apply so-called Bacillus Subtilis bacteria to the fabric. These detect when heat and moisture develop on the skin. In response, they contract. The developers have taken advantage of this reaction. The garment has holes that open and close. Depending on whether the bacteria contract or not. As soon as the wearer of this intelligent sportswear starts sweating, the bacteria provide better ventilation.

Conclusion: Innovative yarns and which trends move the industry

Innovative yarns can be used to connect completely different areas. This opens up an unbelievably wide range of new possibilities. Wearables, for example, whose development is only just beginning. The use of waste as a raw material for new fibres, yarns and textiles is another area of application that still has a lot of development potential. New ideas for yarn and twist also offer the European textile industry new economic perspectives. Because smart minds can always prevail against cheap competition with all its negative consequences for society and the environment.

Anna is a person of influence: as a tech-savvy community manager and detail-obsessed trend scout, she is the central link between our network of experts and our customers. She quickly finds the right contacts for your challenges and professionally and passionately uncovers potential in new markets.