How transparent solar cells turn the window into a power plant

For a long time, windows were mainly responsible for energy losses from buildings. Only windows specially developed for passive houses achieved a positive energy balance. 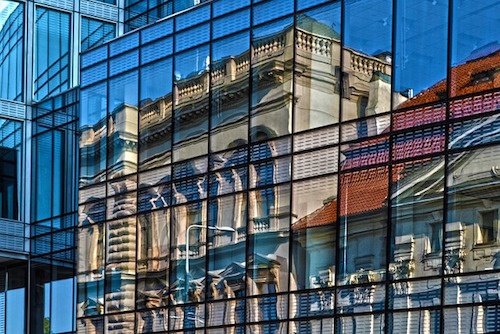 Transparent solar cells and films, on the other hand, will allow windows to serve as small power plants in the future. Read in this blog entry how the window can develop into the energy producer of the future.

From energy guzzler to energy source through transparent solar cells

In the past, the term "wind holes" was quite common for windows. And even in the English term "window" the air currents still resonate linguistically. The energetic balance of such a wind hole was of course catastrophic. In times when glass was still unaffordable for the general population, these windows still had relatively small, not to say tiny, dimensions.

The energy is lost through the windows

With the double glazing of the windows, the unwanted air flow also disappeared. A lot of heat energy let and still let these windows out. Although windows make up only ten percent of the insulated outer shell of a building, half of the heating energy is lost through them.

In a passive house, however, windows do not only play the role of an energy waster. They can also supply buildings with heat energy through passive solar use. Windows designed especially for passive houses sometimes even achieve a positive energy balance.

At Michigan State University, a team of researchers led by Professor Richard Lunt has now developed a transparent solar cell. This would also be ideal for use as a window. The glass palaces of a large city could thus serve as power stations that generate energy exactly where large quantities of it are also needed.

The energy comes from invisible light

In the technology developed by Lunt's team, organic salt molecules absorb only the part of the light spectrum that is invisible to the human eye. These waves are transmitted to the edges of the solar cell. Only there is the light energy converted into electricity. However, Lunt's invention also has one weakness: its efficiency is just one percent. The research team estimates that five percent would be possible. For comparison: Monocrystalline solar cells, as they are often found on roofs, achieve an efficiency of up to 25 percent. So there is still a lot to be done to make the transparent solar cell marketable.

But Lunt's invention is by no means the only one with the potential to turn windows into power plants. At the University of Leipzig, a group of scientists led by Professor Marius Grundmann has developed a transparent solar cell that can be directly evaporated onto windows. The zinc and nickel oxides required for the production are also inexpensive and available in almost unlimited quantities. And the invention is already three percent efficient.

Photosynthesis at the Science Tower in Graz

Whether and when the two almost invisible solar power plants will also be available on the market in window frames has not yet been determined. However, it is relatively certain that the Science Tower in Graz will be completed this autumn. Construction is progressing rapidly. This landmark of Smart City Graz, which will be used as a research building for Urban and Green Technologies, has a lot of new technologies on board. The energy glass façade is one of them. This converts sunlight into electrical energy and is transparent in colour. The process is similar to photosynthesis in plants. The core of the energy glass is the so-called Grätzel cell, an electrochemical dye solar cell. It is named after its inventor Michael Grätzel, by the way, and has nothing to do with the Viennese Grätzl. The energy glass used in the Science Tower consists of a coloured electrolyte enclosed by two glass panes. So it is transparent and therefore also suitable as a window - but also as a colored one.

The solar film developed by Dresden-based startup Heliatek is also transparent and colorful. HeliaFilm® is thinner than one millimeter, ultra-light and flexible. It consists of a layer of organic molecules that are deposited onto a flexible PET film at very low temperatures. No dangerous or scarce raw materials are required for production. Production takes place on the roll and is extremely cost-effective: the energy payback time, also called "energy payback time", is only three months. The efficiency of the film is extremely high: Heliatek currently holds the world record for organic solar cells with a cell efficiency of 13.2 percent for opaque (non-transparent) organic solar cells. With a transparency of 50 percent, the efficiency is still 6 percent. The film is therefore also suitable for turning windows into solar power plants. Especially when a certain tint is desired for these windows. Just as is the case in automobiles, for example. Or in hip glass palaces, seminar rooms and office buildings.

Conclusion: How transparent solar cells turn the window into a power plant

A window means the invisible loss of energy. And exactly where it is urgently needed. Namely in buildings. Thanks to the latest developments, some of which are already available on the market, the role of the window as an invisible energy waster is reversed. Transparent solar cells or films turn facades and windows into power plants. Power plants that provide more or less invisible and unnoticed energy from the sun. These windows thus reinforce a trend in solar energy production: their shape changes from ugly panels mounted on metal frames on rooftops to almost invisible but permanent companions: solar cells become roof tiles or an integral part of business bags or backpacks. So it will be interesting to see where and how electricity will still be generated from the sun everywhere in the future.