Get in touch with us
Trends & Future, Industry

The glass in windows and doors is intended to provide a view outwards while at the same time protecting us from external conditions. But there is still plenty of potential in the transparent material, which is increasingly being used as a basis for entire house facades. 4 innovations give you an insight into what is still in the glass. 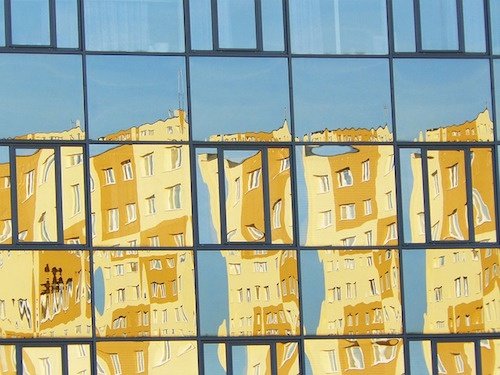 Whether we want it to be or not. We are a generation of couch potatoes: we spend about 90 percent of our time inside buildings. Doors and, in particular, windows play a key role. They are the connecting pieces to at least three of the four elements air, earth, water and light, which we absolutely need for life.
Especially the windows or entire glass facades are able to protect us better and better from the adverse influences of the outside world such as wind, heat, cold, noise and exhaust fumes as well as uninvited guests: This means that windows have increasingly effective sound insulation and, thanks to safety glazing, they are also more resistant to burglars. But as some innovations show, the functions of glass can be considerably extended. These four examples show you the new possibilities offered by glass installed in windows, doors or mirrors:

Venetian blinds, roller blinds, pleated blinds, curtains or even window or roller shutters - there are numerous possibilities to protect the interior from bad sunlight. They all need more or less space. The same is not necessary if the sun protection is installed in the window glass. There are several possibilities:

Windows and facades as energy plants

While intelligent glass regulates the amount of energy that it allows to pass from the outside into the interior, transparent solar cells turn window and glass fronts into entire power plants. For solar expert Richard Lunt, who is currently working on the development of a fully transparent solar cell at Michigan State University, this form of energy production could soon be able to cover a significant part of the power requirement. If the storage options were to be optimized, Lunt believes that the entire energy requirements of the USA could be covered by solar power in the future. In order to generate energy on the façade, a slightly older technology will be used at the Science Tower in Graz. The so-called "Grätzel cell" uses the principle of photosynthesis to generate energy. Although the glass façade is transparent, it is colored. The tower, which is to become the emblem of the Smart City Graz, is not yet completely finished. As a web-cam proves, the construction is already well advanced. However, there are other fascinating technologies to turn facades and windows into real power plants.

Windows and mirrors as displays

Panasonic's technicians developed a sensational interpretation of "intelligent glass": they developed a prototype of a transparent OLED TV. Presented for the first time at the CES 2016, this model seemed to be nothing more than a glass door for a wall unit. But suddenly it turned black and a television picture appeared. In addition to the application in the living room, Panasonic also wants to develop applications for the public space.

Google engineer Max Braun demonstrated that you can build cool smart glass gadgets with far less effort. He used only a few milimetres thin LED display and clamped it between the door of his bathroom cabinet and a semi-transparent mirror. A graphic card was placed on the back of the door. Now Braun has a mirror that shows him not only his own face but also the date, time, weather forecast and an RSS stream of a news agency. A building instruction for a similarly clever seal can be found here. Of course, the large engineering companies are also working on such smart mirrors. On the CES 2018 there was a bathroom mirror with integrated Alexa voice control. This allows many smart devices to be controlled via speech. However, the device does not display additional information next to its own mirror image.

Glass combined with light to form an intelligent lighting fixture

The Viennese technology company LightGlass, founded in 2014, has developed a technology that combines glass and light into a product that simulates daylight. This means that every glass surface simultaneously becomes a natural-looking light source, i. e. almost a window. The self-luminous glass is suitable for both indoor and outdoor use and can be controlled by either manual keypad switches or apps, Bluetooth and WLAN. Thanks to a further in-house development, technical modules such as displays, sensors, cameras or photovoltaic systems can also be transparently integrated into the glass and connected directly to building control systems and radio networks. Thanks to this innovation, the company has already won numerous awards. Most recently, their ALED Privacy-Plus technology was awarded with the renowned American Architecture Award, the Architect A+Award.

Glass is already a fascinating material: although it is completely transparent, it is full of possibilities. Of course, the four innovations are only a small part of it. After all, they are limited to the role of glass in windows, doors, facades and mirrors. Without glass you probably couldn't read this blog post at all. Without an infrastructure of fiber optic cables, the dear World Wide Web would be so slow that it would probably not have been able to establish itself in this form at all.