How robotics is changing the working world of the future

Artificial intelligence (AI), robotics and other forms of automation are advancing at a rapid pace, bringing companies great benefits in terms of efficiency and productivity. For advanced economies such as the US, the EU and Japan, automation could be the key to reverse the productivity slowdown since the global financial crisis. Read this article to find out how robotics will affect employment in different sectors.

Which jobs are at risk of automation and to what extent?

In the course of the digital transformation, our way of working will change massively and be completely different in the future than it is today. Professions that can be easily replaced because of a high number of recurring processes and tasks that can be learned and implemented by robots are at particular risk. However, professions with low substitutability potential require creativity and flexibility. Thus, the coming years will be characterized by four professional spheres:

Low-wage jobs will be particularly affected by automation, which requires neither special qualifications nor much interaction with other employees. Therefore, lower-skilled people with less income run the risk of losing their jobs. The situation is different for those with above-average incomes, however. Studies in the USA show that employees with an hourly wage of more than 30 dollars are hardly affected by automation.

The effects of robotics have both advantages and disadvantages. On the one hand, technology increases productivity, but on the other hand, it threatens jobs. With 71 percent of working hours, people still work considerably more than machines. However, according to the World Economic Forum, robots are expected to overtake humans by 2025 and work longer than humans for the first time (52 to 48 percent).

A a result of the new industrial revolution, 75 million people could lose the job by 2022. This conclusion was published in a study by the World Economic Forum (WEF) entitled "The Future of Jobs 2018". At the same time, the WEF estimates that 133 million new jobs will be created in the same period. According to the World Economic Forum, politicians and business leaders will, therefore, have to face the shortage of skilled workers and come up with solutions for education and training programs. By 2022, everyone would have to expect an average of 101 additional learning days.

Advanced Robotics in production and logistics

Advanced Robotics is the key technology for the automated factory of the future. The market is estimated to grow 46 % by 2021, reaching a volume of 3.7 billion USD for production tasks.

From industrial robots to autonomous robots

Compared to standard industrial robots, advanced robots react to their environment and act autonomously. They can, therefore, perform tasks assigned to humans. For example, robots that complete the entire delivery process. They receive their orders via WLAN, navigate autonomously to the corresponding shelf, recognize the right object with cameras and sensors, grab it, and transport it for further processing. In contrast to conventional industrial robots, their path and handling is not predetermined but adapts automatically to the situation.

Effects of Advanced Robotics on workplaces

The Boston Consulting Group's latest study "Advanced Robotics in the Factory of the Future" has investigated the impact of advanced robot technology on the world of work. The survey was conducted among executives as well as production and technology managers from more than 1,300 major corporations and medium-sized companies in various industries worldwide.

The results show that industrial companies, particularly in EU countries such as Germany, France, and Austria, see the opportunities offered by automation. Moreover, they do not expect high job reductions.

On the other hand, 20 % of respondents in China and Poland believe that the use of robots can cut more than 20 percent of jobs in the production sector. This figure is only 5% in Austria and 2% in Germany. 31 and 32 % respectively in Germany and Austria expect only a moderate reduction of 5 to 10 % of jobs by 2025. The reason for this difference is probably the high degree of automation in Germany or Austria, while in China and Poland, many standardizable activities can still be replaced by automation.

Routine tasks will be automated in the future, but at the same time, new job profiles will emerge requiring new skills: 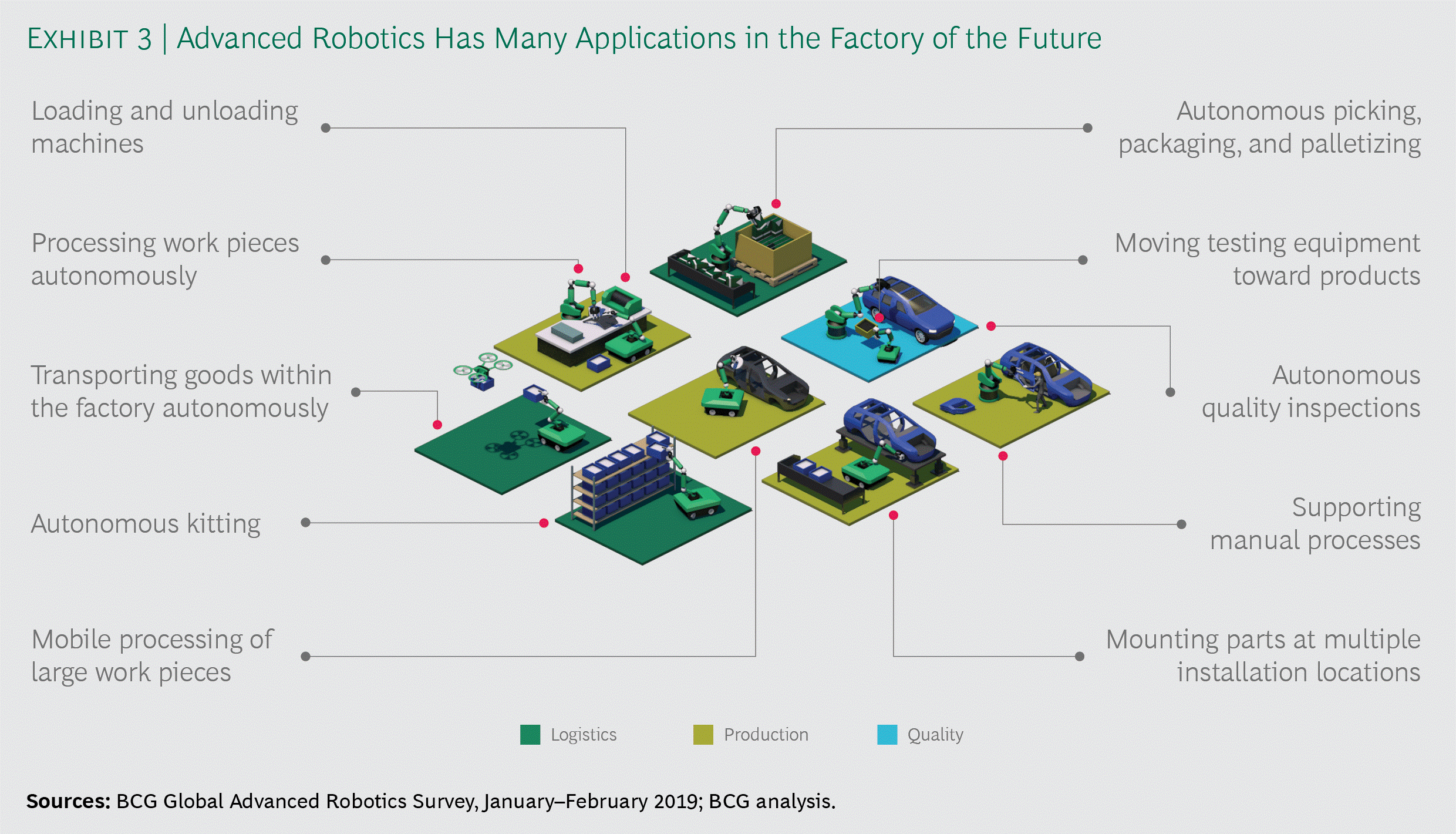 Impact of robotics on other industries

Unlike the first industrial revolution, it is not only the jobs of workers that are threatened. Shortly, robots will also perform more and more tasks that were initially dedicated to employees.

Based on a data set compiled by the OECD that carefully examines the tasks associated with employing over 200,000 workers in 29 countries, PwC estimated in its study "Will robots really steal our jobs?" the proportion of existing jobs with a high risk of automation by 2030. PwC identifies not only significant differences in the possible degree of automation between the sectors but also determines high automation potentials in administration, financial services, trade, and science. PwC assumes a development over the period up to the 2030s in three overlapping waves:

The study also examined the automation potentials of the individual waves in relation to the individual employee group according to their educational level, age and gender.

The main differences can be found in the level of education. Highly qualified employees are significantly less affected by automation than low-skilled employees. The reasons for this are better adaptability of well-educated workers to technological change and the fact that they are more likely to hold leadership positions that are necessary for the application of human judgement and the design and monitoring of AI-based systems.

Differences by age group are less pronounced, although it may be more difficult for older workers to adapt to change and gain new qualifications than for younger employees. This is particularly true for less-educated men in transport and manufacturing, who currently represent a relatively high percentage of male workers and enter the third wave of automation. However, in the early waves of automation, which apply to office workers for example, women may be relatively more affected. 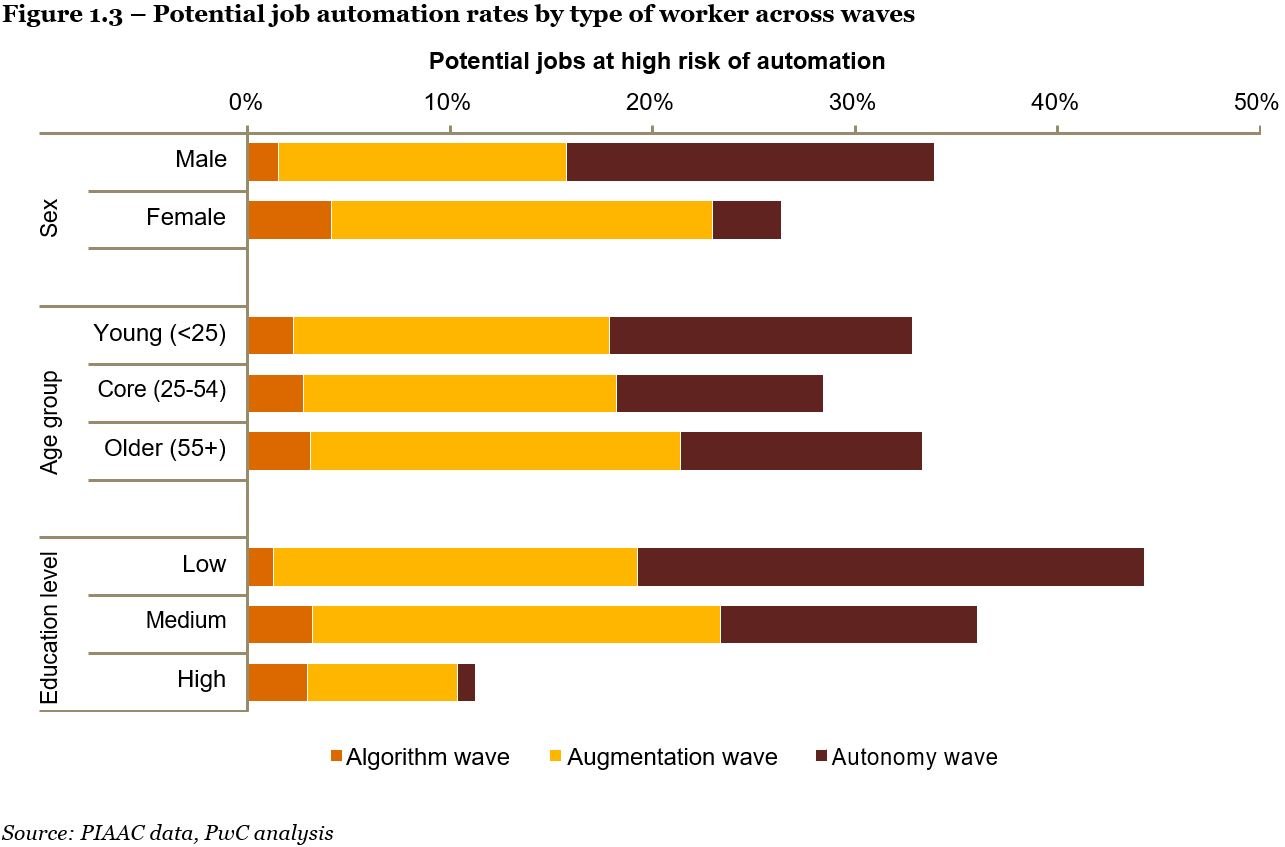 Conclusion: Robotics changes the labour market but does not destroy it

Robotic automation is unlikely to destroy the labour market - at least in terms of the number of positions. However, jobs are subject to massive change. Robotics may well pose a threat, especially to people in the low-wage, low-skilled sector who are most affected by automation. Companies must, therefore, adapt quickly to these changes and (re)train and educate their employees to remain competitive in the next years.

You can read more about this topic in our blog post:

„Do robots really take our work away or just do it for us?"

Born and raised in Vienna. Since 2012 she has been in charge of Business Development at LEAD Innovation with the functions marketing, sales and communication.