Elon Musk and the future of the brain-machine interface

Elon Musk has had a lot to offer over the past 25 years, including an early online bank, solar roof tiles, a tunnelling machine, an electric car, a reusable rocket, and even an electric car shot into space with a rocket. The entrepreneur recently caused another sensation in San Francisco with the launch of his Neuralink brain-machine interface. You can read what this innovative technology is all about in this article.

Fields of application of the Neuralink technology

Brain-machine interfaces (BMIs) are promising for the restoration of sensory and motor function and the treatment of neurological disorders. However, clinical BMIs are not yet widespread, partly because modest bandwidths limit their potential.

This is exactly where the Neuralink start-up founded by Elon Musk in 2017 comes in. The company develops brain-machine interfaces with extremely high bandwidth to connect people and computers. In addition, the potential impact of this brain-computer interface on the surrounding brain tissue is expected to be less than that of the technologies currently in use.

With regard to concrete objectives, the initial focus is on medical applications. Neuralink intends to launch a product for use in certain severe brain injuries (stroke, cancer lesion, congenital brain damage) as early as 2021. Further potential applications are intended to support visual, hearing or other sensory and motor deficits.

According to Neuralink President Max Hodak, the company plans to start clinical trials in humans as early as next year. The aim of the studies is to drill four 8 mm holes into the skulls of paralyzed patients and insert implants that will enable them to control computers and smartphones with their thoughts.

The company has already carried out tests on monkeys and rats. For example, a monkey was already able to control a computer with his brain. "Many have written it off as impossible," says Hodak. "There will be significant developments in this area over the next ten years that should be taken seriously.

How the Neuralink Human-Machine interface works

The Neuralink interface consists of fine, flexible electrode "threads" and an eight millimeter sensor placed in the brain. The filaments are attached to the sensor and are designed to detect, record and transmit the activity of the nerve cells to the sensor. The sensor in turn sends the signals via Bluetooth to a battery-powered receiver, which is located on the outside of the head behind the ear. From there, the information is sent to a computer. This is how Elon Musk describes the future functioning of BIM in his presentation on 17 July 2019.

The streaming of data with full bandwidth from the device and the simultaneous recording of all channels is possible with a USB-C cable. This system has achieved a peak yield of up to 85.5 percent with permanently implanted electrodes. Neuralink's approach therefore offers enormous packing density and scalability.

For implantation, Neuralink has developed a neurosurgical robot that places the sensor and electrodes like a "sewing machine". In order to avoid injury to surface vessels and to target specific brain regions, each thread is individually inserted into the brain with an accuracy of micrometers. 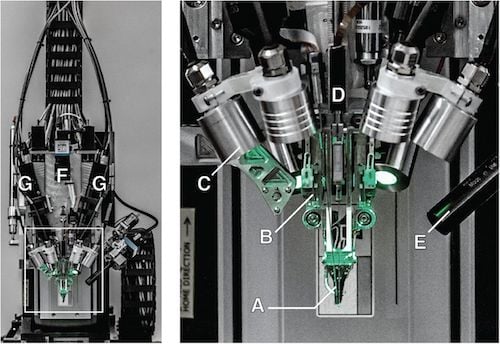 Insertion involves implanting incredibly thin sutures (between 4 and 6 μm), about one-third the diameter of the thinnest human hair, deep into the brain tissue of a person. The robot can implant six threads (192 electrodes) per minute. 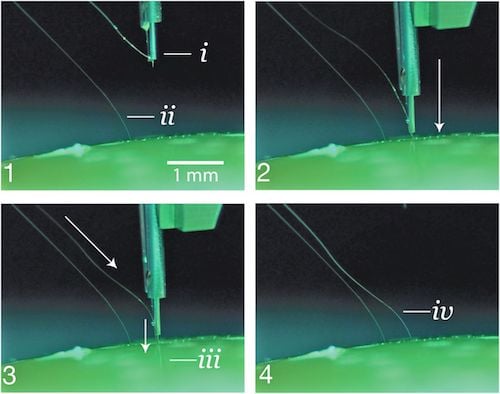 Implantation of the sutures with the robot, Whitepaper Neuralink

Under the direction of a neurosurgeon, the robot has already implanted the fine electrodes in 19 rats. In 87 percent of the cases, this was achieved correctly. During a first demonstration in front of a reporter, the start-up showed that it was able to record the brain activity of a rat via thousands of tiny electrodes that were surgically implanted next to the neurons and synapses of the animal.

Already in September 2016 Musk declared that a "human AI symbiosis" would help to democratize AI. Humans must merge with artificial intelligence to prevent the adoption of artificial intelligence. In the documentary "Do You Trust This Computer? Musk stressed: "AI could be used to create an immortal dictator from whom we could never escape."

„I think if we can effectively merge with A.I. by improving the neural link between your cortex and your digital extension of yourself, which already, like I said, already exists, just has a bandwidth issue. And then effectively you become an A.I.-human symbiote. And if that then is widespread, with anyone who wants it can have it, then we solve the control problem as well, we don’t have to worry about some evil dictator A.I. because we are the A.I. collectively.“

Neuralink sets its goals high - probably higher than any previous Musk company. The technology is extremely promising for medical applications if it works: A brain connection with a high bandwidth that is implanted via a robot operation. The hope is that the results will be better and more accurate than in previous experiments involving brain-machine interfaces.

Born in the Salzkammergut. After working for Shell and Porsche, he concentrated on innovation management as a study assistant at the Innovation Department of the Vienna University of Economics and Business Administration. In 2003 he founded LEAD Innovation and manages the company as Managing Partner. Lectures at MIT, in front of companies like Google or NASA.