Flagging out in logistics and its negative effects

The practice of flagging out in international freight transport has increased considerably since the end of the 1990s. You can read in this article where the reasons for this are to be found and what effects are associated with it.

Reasons for the increasing flagging-out

Flagging out is the registration of trucks or semi-trailers in another EU member state for the use of cost advantages. Especially since the enlargement of the EU in 2004, nothing has stood in the way of flagging out to low-wage countries.

In many cases, the tendency to flagg out is due to the fact that Austrian company locations are no longer competitive in European competition. A study conducted by the Vienna University of Economics and Business Administration identified the most important of these in a survey of Austrian transport companies: 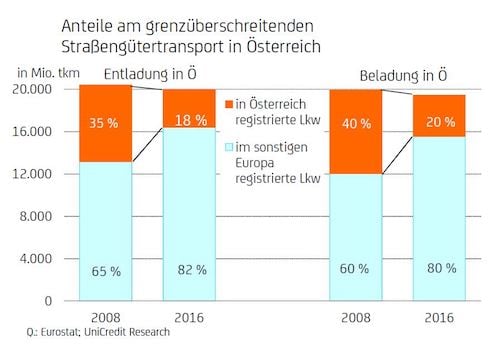 Studies show that flagging out costs the Austrian government 55,000 euros per truck per year. Austria alone will not be able to find a satisfactory solution, as fair competition requires uniform rules throughout the EU. Reducing non-wage labour costs in Austria could, however, invalidate one of the main arguments most often put forward in favour of flagging out and increase competitiveness vis-à-vis low-wage countries.

Social dumping through freedom to provide services and freedom of establishment

Logistics associations are increasingly concerned about the development of the industry in Europe. The main focus here is on complete fleets that are licensed in Eastern Europe, but are stationed permanently in Germany or Austria, for example, and are also dispatched from there. Taxes, labour and social costs for these trucks are at Eastern European low wage and social standards, although in Germany and Austria the minimum wage, social security contributions and taxes would be due.

In fact, this would be legalized undeclared work with correspondingly poor working conditions, which, disguised as freedom to provide services, virtually floods the markets, according to the German Federal Association for Road Haulage, Logistics and Waste Disposal (BGL). The freedom to provide services and freedom of establishment, which are basically permitted in the EU, would be misused for social dumping. An obligation for companies to set up in the country in which they offer services on a permanent basis and predominantly could remedy this situation.

The personnel expenditure per employee in road freight transport in Austria is almost 40 percent higher than the EU28 average. For example, the average hourly wage in Austria is 15 euros, in Poland and the Czech Republic 5 euros and in Romania and Bulgaria only 3 euros (source: Eurostat). Flagging out therefore also leads to the relocation of jobs to Eastern Europe. Jobs of domestic truck drivers are increasingly being lost.

The shortage of qualified truck drivers has worsened in recent years. Flagging out plays an important role in this context, as it is much more difficult for companies to train employees from foreign countries and in different languages.

Conclusion: Measures against flagging out

Although individual companies are returning to Austria, this effect could probably be intensified if, in the event of violations of social dumping rules, the clients - i.e. the industry, but also the freight forwarders - could also be held responsible. In addition, there is an urgent need to create more attractive location conditions, in particular by reducing non-wage labour costs, in order to offer transport companies competitive conditions in Austria. It remains to be seen whether the legislator will react appropriately to this challenge.

Born in Vienna. Since 2018 "Certified Service Design Thinker" he has been pursuing his passion as Innovation Manager at LEAD Innovation.